IBMT activists shared the history of the of International Brigade volunteers from Manchester with attendees of the city’s annual history festival, held on the weekend of 11-12 June.

Manchester Histories Festival 2022 was held in the restored Gorton Monastery, which is close to the birthplace of British Battalion commander Sam Wild, whose daughters Hilary Jones and Dolores Long were on hand to answer questions from visitors. 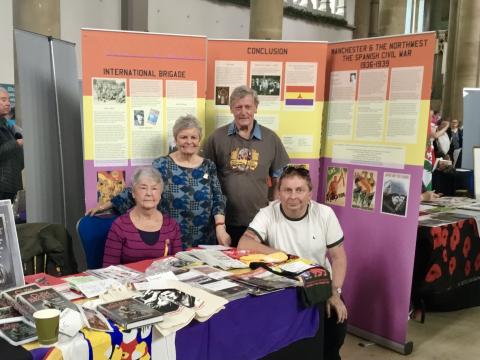 Copies of Robert Hargreaves’ biography of Clem Beckett and Chris Hall’s book, ‘The Nurse Who Became a Spy’, about Manchester born nurse Madge Addy, were on sale. Beckett, killed at Jarama, was a speedway star who gained fame at the nearby Belle Vue stadium.

Dolores Long, reflecting on the IBMT presence at the festival, said: ‘No matter where we take the stall, we always meet people who are curious to know more about the war in Spain, and especially the British volunteers.’ Rob Hargreaves added: ‘We were next to the stall manned by military historians – they seemed to know all about the Chauchat light machine gun which British volunteers struggled with at Jarama, and was notorious for jamming.’

The talk was held at the Waterstones bookshop in Manchester’s Arndale Centre. It was well attended and Hargreaves, who is a writer and retired journalist, thanked the audience, which included a number of speedway enthusiasts. Hargreaves was keen to reach as wide an audience as possible with Beckett’s story and seeks to broaden awareness of the Spanish Civil War generally. 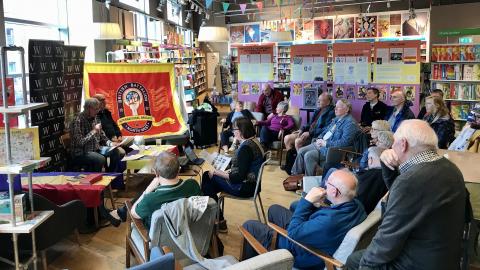 Clem Beckett, originally from Oldham, was an engineer, speedway cyclist in the 1930s and a radical associated with the Young Communist League and the Communist Party. He joined the International Brigade, earmarked to serve as an engineer, but became a fighter and ultimately gave his life in the Spanish Civil War.

His contribution to speedway was significant too, both as a daredevil motorcyclist and as a campaigner for safer tracks and fairer treatment for men and women riders in the 1930s.  Speedway was a hugely popular spectator sport, attracting large crowds like football. Beckett raced at tracks including White City, Audenshaw and Belle Vue in Manchester.

But class barriers and conflict was there too, with working-class men and women riders facing pressures from gentlemen-enthusiasts and business on how the sport was run and financed. Later banned from speedway for trying to protect riders from exploitation, Clem Beckett took to 'wall of death' stunt riding instead.