The legacy of the Reading volunteers

This is an edited version of a speech by IBMT member John Partington, who is also a member of the TSSA union, Reading Trades Union Council and Oxford and District Trades Union Council. It was read during a ceremony held on 1 May 2022 at the International Brigade Memorial in Reading, Forbury Gardens. 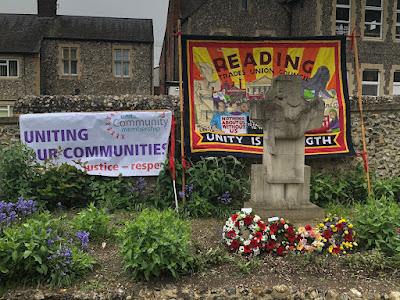 In the International Brigades the world witnessed the coming together of a mass of volunteers, ‘one in spirit’, coalescing around an ideal and making ‘the most heroic efforts’, as HG Wells wrote of them. They existed in a time of sharp ideological extremes, where the thought of coalition building or finding middle ground between the left and the far right was unthinkable.

Compare the anti-Fidesz ‘United for Hungary’ coalition in the Hungarian general election this year which saw the Hungarian Socialist Party – the successor to the former ruling communist Hungarian Socialist Workers’ Party – in alliance with the Jobbik fascists and other conservative elements. How times have changed. For the international volunteers, the fascist scorpion – to reference the visual metaphor of the Oxford International Brigades Memorial – had to be crushed.

The International Brigades have cast a long shadow, inspiring many generations of left-wing, anti-fascist volunteers that have followed.

The very act of fighting for a foreign army was and remains a crime in English and Scottish law. In the example of the Spanish Civil War, that act of fighting was not the only illegal activity undertaken to advance the anti-fascist cause.

In Reading, parallel to the British government’s position of non-intervention, officialdom also hampered local efforts to support the anti-fascists in Spain. On 22 August 1936, Thomas Wise, Thomas Poole and Reginald Silverthorne ‘were summoned [to the Police Court] for collecting money in the street for charitable purposes without a permit authorising such collection’. The three men were collecting money to support the democratic Republican government of Spain. They were ordered to pay 4s each in fines. This 12s penalty more than negated the 10s ½d collected by the three.

The brutality of the war itself can be seen in the dramatic account of the Battle of Brunete from International Brigader Frank Hillsley, known in Spain as Frank Norman, given to the Reading Standard in November 1937:

‘We saw the civilian population out in front of the trenches – women, children and old men. We got within about twenty yards of them when the fascists started heaving hand grenades over the heads of the civilians, and we had a hand-to-hand fight for about half-an-hour. When we had finished, not a fascist had got away alive.'

The violence of this excerpt contrasts acutely with the work of Dr Reginald Saxton and nurse Thora Silverthorne, who both left Reading for Spain as part of the British Medical Unit, performing live-saving operations on the war-wounded.

The actions of Frank, Saxton, Silverthorne and their comrades-in-arms could be summed up in the words of Woody Guthrie, singing of the anti-fascist war to come:

‘People of every colour

Marching side by side

Where a million fascists died

You fascists bound to lose!’

The spirit of the International Brigades was strong, though they were ultimately defeated by the power of a professional army backed by Italian and German military might. Wells, writing in 1940, summed up the anti-fascist efforts in Spain as follows:

‘Volunteers to aid the Spanish Left poured from every quarter of the earth, to discover themselves one in spirit and hopelessly diverse in method…After the most heroic efforts they shared at last a common defeat.’

Today we remember those ‘heroic efforts’, the International Brigaders – ‘one in spirit’.