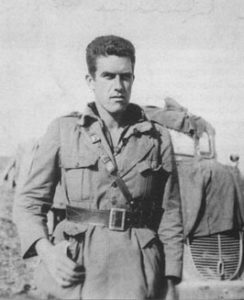 Bill Alexander, an experienced communist activist who went on to be a political commissar, commander of the British Battalion in Spain, author of British Volunteers for Liberty and Secretary of the International Brigade Association.

Between 1936 and 1939 over 35,000 men and women, from over 50 countries, left their homes to volunteer for the Republican forces. More than 2,300 of these came from Britain, Ireland and the commonwealth, of whom over 500 were killed (see below). Perhaps 80% were members of the Communist Party, or the Young Communist League, though volunteers with an alternative political background or who were active in the trade union movement were also accepted. Recent research suggests that a significant number, perhaps 20%, were Jewish in origin.

The volunteers came from overwhelmingly working class backgrounds, with large numbers hailing from cities such as London, Manchester, Liverpool and Glasgow. Only a small number were unemployed with large numbers involved in industrial occupations, such as labouring, construction, ship-building and mining.

And despite an enduring image of the brigades comprising young poets, the volunteers were somewhat older than this myth would have it. The average age for the volunteers from Britain was twenty-nine.

« Introduction
» Why to Spain